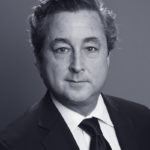 His practice consists principally of federal and state trial and appellate litigation, arbitration and mediation. He served as lead trial counsel in notable cases involving antipiracy, art law, copyrights, trademarks, cybersquatting, privacy, trusts and decedents estates, licensing, corporate and real estate transactions. He has litigated conflict of laws and questions of Austrian, Canadian, French, German, Italian, Russian and Swiss law and procedure. He has handled contentious matters in Surrogate’s Court, including a successful appeal in the landmark case of Matter of Flamenbaum, 22 N.Y.3d 962 (2013) recovering an ancient Assyrian tablet for the Pergamon Museum in Berlin and the successful removal of the co-executors U.S. Trust Company and butler Bernard Lafferty in Matter of Doris Duke, at the time the largest estate probated in New York history.

He serves as the Newsletter Editor for the Cicero League of International Lawyers. He serves as First Vice President of the National Arts Club. He served for five years on the Board of Directors of the Federal Bar Association, having served as General Counsel (2011-2012), Vice President for the Second Circuit (2008-2013), President of the Southern District of New York Chapter (2006-2008), Member of The Federal Lawyer Editorial Board (2009-2011)and Member of the FBA Government Relations Committee (2010-2013). He is a past President of Network of Bar Leaders (2013-2014), a coalition of over fifty bar associations in metropolitan New York. He is a Fellow of the Foundation of the New York State Bar Association. He served on the Planning Committee for the 2014 Second Circuit Judicial Conference Cybersecurity in an Age of Cyberterrorism.